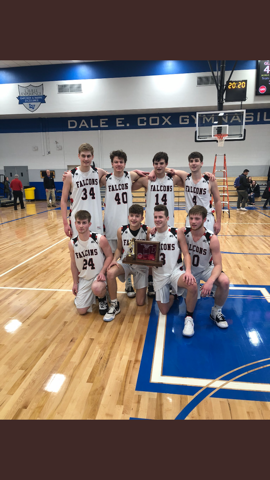 Dominant. That’s the best way to describe the week that was for the John Glenn Falcons. The Falcons capped a win with a scoreless fourth quarter to pull away from the cougars for their twelfth win of the year versus just three losses. The Falcons followed the balanced scoring mantra they have all year putting six in the scoring column led by a 13 point bounce back game from Carter Yung and 12 from tournament MVP Rob Porter. Khori Barker hit two first half threes en route to 11 points. Brycen Hannah battled all night on the glass along with Jake Frankiewicz who bounced back with a solid second half performance. Silas Kaser took care of the ball well along with Noah Abrell and Jack Porter who provided key minutes as the Falcons fought foul trouble in the first half.

This Glenn varsity team moves to 12 and 3 on the year.